DCALC’s priority area of concern is the Dunsborough township which includes the Cape Naturaliste Streams; Dandatup and Dugalup Brooks and several significant CoB reserves. These reserves contain significant environmental values such as Threatened or Priority Ecological Communities and species.    The Priority Area is located within the western portion of the Geographe Catchment and northern tip of the Cape to Cape Catchment. This area is bounded by Hurtford Street to the north, Big Rock Reserve in the East, Quindalup Boat Ramp in the West and Wilson Avenue, Quindalup in the south (Refer to the red boundary on the map).

A second area of concern, outside the Priority Area includes the ecologically significant Meelup Regional Park to the west and Toby Inlet Catchment to the east. DCALC will undertake activities in these areas to support the activities of these stakeholders. (Refer to the blue boundary on the map). 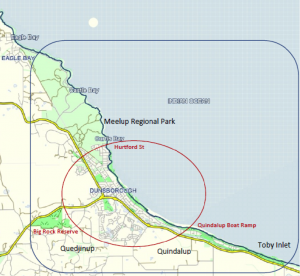 Volunteer and help make the change you’d like to see